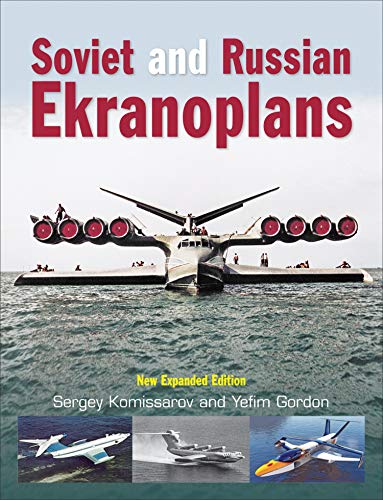 Description du livre Crecy Publishing, United Kingdom, 2020. Hardback. Etat : New. New, Expanded. Language: English. Brand new Book. One of the most interesting strands in aviation history has been the development of wing-in-ground effect (WIG) vehicles, or as they are more commonly known by their Russian name, ekranoplans.Beginning with a brief outline of the concept from the theory to viable technical solutions, the book gives a historical survey of the development of WIG research and construction in Russia. A large part of the book focuses on a type-by-type description of specific designs of ekranoplans developed in the Soviet Union and Russia in the course of half a century. Special emphasis is given to the activities of Rostislav Alekseyev, who has played an enormous role in the development of this new technology. Ekranoplans developed by several other major design bureau, notably those led by Sukhoi, Bartini and Beriyev, are also considered. Economic and political transformations following the break-up of the Soviet Union led to the emergence of privately owned design bureau and firms that are now pursuing the development of WIG craft in Russia, given the lack of interest on the part of the military and the state in this branch of transport technology. This new edition has been fully updated with 60 new pages and highlights projects that are under development. Packed with photos, artworks and drawings, the book includes examples of similar technology being developed in countries outside of Russia, including the USA, Germany and China. N° de réf. du vendeur CRY9781910809365

Description du livre Hardcover. Etat : New. Hardcover. One of the most interesting strands in aviation history has been the development of wing-in-ground effect (WIG) vehicles, or as they are more commonly known by their Russian name, ekranopl.Shipping may be from multiple locations in the US or from the UK, depending on stock availability. 304 pages. 1.648. N° de réf. du vendeur 9781910809365