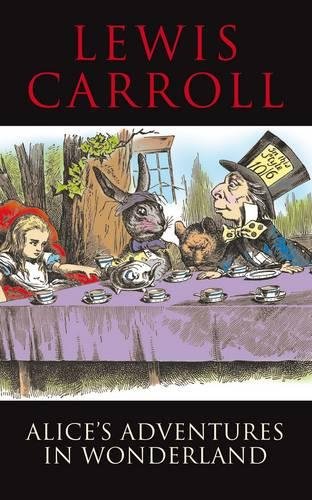 Curiouser and curiouser! cries Alice as she expands like the largest telescope that ever was and stares down at her distant feet. That is among the first strange occurrences after she follows a White Rabbit down a rabbit-hole, and things are about to get even more bizarre. Alice enters a magical subterranean world and encounters an extraordinary cast of characters, including the Cheshire Cat, March Hare and Mock Turtle. She attends a very strange tea party and is invited by the Queen of Hearts a monarch quick to suggest decapitation for anyone who displeases her to play a game of croquet where flamingos are used as mallets and hedgehogs as balls. Alice also witnesses a Lobster Quadrille and attends a trial in which the Knave of Hearts is accused of stealing the Queens tarts. Lewis Carrolls fantastical dreamscape, described by one early reviewer as an excellent piece of nonsense, is a blissfully surreal anthropomorphic treasure that has enchanted readers of all ages since it first appeared in 1865.

Description du livre Hyde Park Editions Ltd. Etat : Acceptable. A readable copy. All pages are intact, and the cover is intact (However the dust cover may be missing). Pages can include considerable notes--in pen or highlighter--but the notes cannot obscure the text. Book may be a price cutter or have a remainder mark. Nį de rťf. du vendeur DU-03-05-08-0217

Description du livre Hyde Park Editions Ltd. Paperback. Etat : Good. A copy that has been read, but remains in clean condition. All pages are intact, and the cover is intact. The spine may show signs of wear. Pages can include limited notes and highlighting, and the copy can include previous owner inscriptions. At ThriftBooks, our motto is: Read More, Spend Less. Nį de rťf. du vendeur G1911060015I3N00