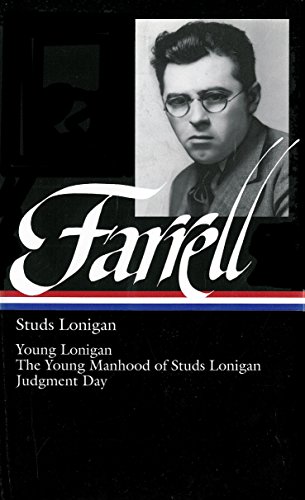 This Library of America volume contains one of the masterpieces of American naturalism and a major influence on generations of American novelists, James T. Farrell’s Studs Lonigan trilogy. Farrell follows the hopes and dissipations of its remarkable main character through the turbulent years of World War I, the Roaring Twenties, and the Great Depression. In William “Studs” Lonigan—a would-be tough guy and archetypal adolescent born to Irish-American parents on Chicago’s South Side—Farrell creates an anti-heroic Everyman helplessly stifled by the conditions under which he grows up. The three novels—Young Lonigan (1932), The Young Manhood of Studs Lonigan (1934), and Judgment Day (1935)—are unparalleled in their sense of the textures of real life: of the institutions of Catholicism, the poolroom and the dance marathon, romance and marriage, gangsterism and ethnic rivalry.

The slang of the street corner, the banalities of family conversation, the inflated rhetoric of sermon and pep talk: Farrell got down on paper the real sound of American urban speech with a directness that had a revolutionary impact on American writing. His unsentimental depiction of the sex lives of Studs and his companions was shocking to contemporary sensibilities, and the trilogy was attacked and sometimes banned as an offense to morals. Equally disturbing to some readers was Farrell’s relentless questioning of education, home life, and the hollowness and spiritual poverty of the cultural choices offered to his protagonist.

Of the milieu in which the trilogy is rooted, Farrell later wrote: “As to the Irishness of it, I generally feel that I’m an Irishman rather than an American,” and later added: “I am a second-generation Irish-American. The effects and scars of immigrations are upon my life. . . . For an Irish boy born in Chicago in 1904, the past was a tragedy of his people.”

This edition of Studs Lonigan, published in celebration of Farrell’s centennial, also includes “Boys and Girls,” a short story derived from a chapter of Young Lonigan that was deleted because the publisher feared its sexual realism would result in prosecution.

James Thomas Farrell (1904—1979) was born in Chicago to a struggling family of second-generation Irish Catholic immi grants. In 1907, his father, James Farrell, a teamster unable to support his growing family, placed young Jim with his maternal grandparents. It was his grandparents’ neighborhood in Chicago’s South Fifties that would provide the background to Farrell’s Studs Lonigan trilogy. Farrell worked his way through the University of Chicago, shedding his Catholic upbringing and absorbing the works of William James, John Dewey, Sigmund Freud, while reading widely in American and European literature: Herman Melville, Sherwood Anderson, H. L. Mencken, Sinclair Lewis, and James Joyce were critical influences on his literary development. “Slob” (1929), his first published story, was also his first render ing of the real life “Studs Lonigan,” a young man he had known growing up in Chicago. Farrell’s first novel, Young Lonigan was published in 1932, followed by The Young Manhood of Studs Lonigan (1934) and Judgment Day (1935)—the three volumes making up his celebrated Studs Lonigan trilogy. A prolific writer, Farrell left more than fifty books of stories and novels behind him when he died in 1979. Alongside his masterpiece Studs Lonigan, Farrell’s best-known works include the Danny O’Neill novels, A World I Never Made, No Star is Lost, Father and Son, and My Days of Anger. James T. Farrell’s Studs Lonigan trilogy is also available in Penguin Classics.