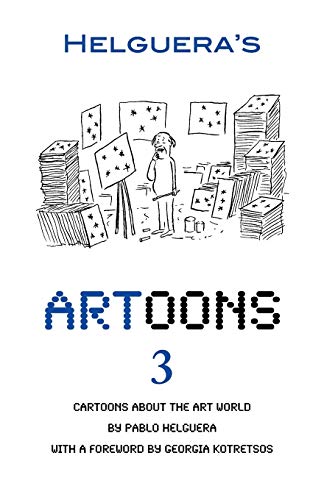 Description du livre Jorge Pinto Books, United States, 2010. Paperback. Etat : New. Language: English. Brand new Book. Drawn in the style of cartoons in The New Yorker, Pablo Helguera's Artoons exist in a category of their own -which has earned him the title of "the art world's anthropologist." While providing an insider's perspective on the workings and contradictions of the contemporary art scene, Helguera's Artoons are satirical, critical, sometimes existential, and always entertaining. "Inimitable: the truth and the beauty, the delusions, the vanity and the reality of the art world." The Art Newspaper, London "To be an art world insider, you need to know of Pablo Helguera and understand his well-observed jokes." Sarah Thornton, author of "Seven Days in the Art World" "Pablo Helguera is the art world's Herblock. His work satirizes the hypocrisy in the world of galleries, museums, collectors and artists and always goes straight to where it hurts the most. Fueled by attitude and based on an intimate knowledge of the subjects his cartoons are witty, sharp and above all highly subversive." Jens Hoffmann, curator and director of CCA Wattis Institute, San Francisco "Comic relief - finally!" Allan McCollum, artist "The foibles, ironies, and occasional stupidity of the art world, captured with clarity and economy." Visual Artists' Newssheet, Ireland > Pablo Helguera is a visual artist living in New York whose works and performances have been presented in museums and art spaces internationally. He is the author of the books The Pablo Helguera Manual of Contemporary Art Style, The Boy Inside the Letter, The Witches of Tepoztlán (and Other Unpublished Operas), Artoons 1 and 2, Theatrum Anatomicum (and other performance lectures), What in the World. ?A museum's subjective biography, among other titles. . N° de réf. du vendeur AAV9781934978498