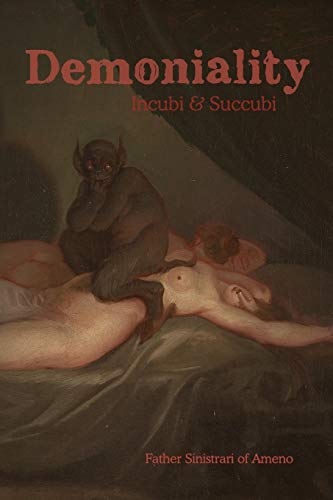 Description du livre Paperback. Etat : New. Language: English. Brand new Book. This 17th century treatise on demonology, written by the respected theologian, Catholic priest, and exorcist, Rev. Father Sinistrari, examines a particular class of spirits known as the incubus and succubus. These minor demons crave sex and often attack their victims while they sleep. Though incubus and succubus are considered less dangerous than possessing demons, they can be relentless in pursuit of their desire and grow violent when moniality advances novel theories about occult biology, claiming demons can reanimate corpses to have sex and impregnate victims with demonic seed to produce offspring who are "tall, hardy, bold and wicked." An expert on witchcraft and sexual sin, Rev. Father Sinistrari included sections on related phenomena, including: bestiality, necrophilia, demonic pacts, witchcraft, witches' marks, devil worship and magical beings such as fauns, centaurs and elves.Father Sinistrari was a learned Franciscan Friar who used deductive reasoning to examine the characteristics of the spirit world. For example, do demons have mass? He concludes they do, but determines they are porous--allowing for their supernatural feats of passing through objects and appearing from nowhere. He also classified the demonic spirits by their actions, explaining that some seek out corrupt pacts with witches or wizards, while others are parasitic and indiscriminately attack the innocent.As a primer on demonic behavior, Demonality is extremely detailed. Father Sinistrari was schooled in the sciences of the time, including herbalism, alchemy, elements, humors and the symptoms of witchcraft--even serving as an advisor to the notorious Inquisition. Because of this, he focuses on diagnoses and remedies to expel the pests, using his alchemical knowledge to devise herbal formulas for countering a demon's specific elemental nature. These elaborate herbal recipes are similar to the elixirs found in a magician's grimoire or a witch's book of shadows.The title of the book is a play on the word bestiality, which conveys Father Sinistrari's belief that copulating with demons is, similarly, a sinful act and a crime. But while incubus and succubus are spirits doing evil deeds, Father Sinistrari is not dismissive of their salvation. He advances the theological argument that these minor demons have souls, and can be saved from damnation. He distinguishes them from the more vulgar type that tend to possess humans in terrifying displays. As proof, he shows how this latter class of demon greatly fears religious relics, while incubus and succubus do not object when in their presence: clear evidence, according to Sinistrari, that they are not damned, but are likely in limbo.As a prominent exorcist of his time, Father Sinistrari encountered victims of demonic activity on a regular basis. Many of the afflicted were, ironically, nuns and priests in the service of God or people under their care. In one story, a young maiden of noble birth is romantically pursued by a spirit that, out of frustration with her chastity, finally attacks her. Another story involves a nun who disappeared to her cell where two voices are heard along with groaning and the creaking of her bed. A rival nun drilled a hole through the partition to see an attractive young man lying with her sister who mysteriously disappeared when the two were confronted.References to demonic attack were carved into stone four thousand years ago, long before Jesus Christ, the greatest exorcist of them all, walked the earth. As Christianity took hold, encounters with these entities were often laid out in moral terms. Father Sinistrari took a different approach: applying reason to understand this curious phenomenon along with theology, history and science. The result is this interesting treatise. NḞ de réf. du vendeur AAV9781946774538