Island Hopping across the Pacific Theater in World War II: The History of America’s Victorious Leapfrogging Strategy against Imperial Japan 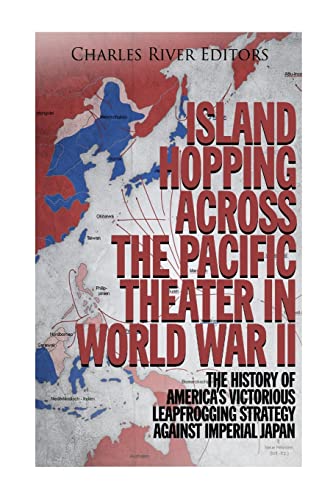 Island Hopping across the Pacific Theater in World War II: The History of America?s Victorious Leapfrogging Strategy against Imperial Japan

Description du livre Paperback. Etat : New. Language: English. Brand new Book. *Includes pictures *Includes accounts of the fighting *Includes online resources and a bibliography for further reading The waters of the Pacific Ocean - stretching deep blue under the tropical sun, or scourged by typhoons - provided World War II's most far-flung battlefield. Two of the world's premier mid 20th century maritime powers, the United States of American and the Empire of Japan, grappled for supremacy across that vast expanse. By the time the Battle of Midway was over in June 1942, the defeat was so devastating for Japan that it was actually kept secret from all but the highest echelons of the Japanese government. Along with the loss of hundreds of aircraft and over 3,000 men killed, the four Japanese aircraft carriers lost, when compared to America's one lost carrier, was critical considering America's huge shipbuilding superiority. The protagonists at Midway were putting into practice a newly emerging naval doctrine, one which ultimately meted out a terrible punishment to the side that miscalculated. Carrier versus carrier combat had come of age. From that point forward, it would be the Americans who operated aggressively across the Pacific. The Guadalcanal Campaign, which ran from August 1942 to February 1943, was a bitter and protracted struggle that also happened to be a strange and transitional confrontation quite unlike any other in the long Pacific War. In conjunction with the American victory at the Battle of Midway, Guadalcanal represented the crucial moment when the balance of power in the Pacific tipped in favor of the Allies, but the idea that Guadalcanal would be such a significant battle would have come as a surprise to military strategists and planners on both sides. By the spring of 1943, American military planners had begun to create a plan to dislodge Japan from east and southeast Asia. To do so, parts of the Philippines were considered main strategic points in the potential Allied attack in the Pacific. The end goal of the Allied plan was an invasion of the Japanese home islands, in which heavy aerial bombardment would precede a ground assault. In order for this to occur, Allied forces would have to occupy areas surrounding Japan, with China adding to Luzon (the largest island in the Philippines) and Formosa (a large island off the coast of China) to create a triangle from which they could launch their bombers. The Allied advance across the Pacific was based on this 1943 plan, with General MacArthur and his forces moving to the north through New Guinea, then Morotai Island, and then to Mindanao, which was the southernmost major island in the Philippines chain. At the same time, Admiral Chester Nimitz sent his fleet through the central Pacific, where they engaged Japanese forces at the Gilbert, Marshall, Marianas and Palau Islands en route to Mindanao. Meanwhile, when Admiral Nimitz was directed to capture an island in the Bonin group, Iwo Jima stood out for its importance in making progress against the mainland, with three airfields that would allow American air forces to attack the Japanese mainland. Near the end of 1944, as Allied forces were pushing across the Pacific and edging ever closer to Japan, plans were drawn up to invade the Ryuku islands, the most prominent of them being Okinawa. Military planners anticipated that an amphibious campaign would last a week, but instead of facing 60,000 Japanese defenders as estimated, there were closer to 120,000 on the island at the beginning of the campaign in April 1945. The Battle of Okinawa was the largest amphibious operation in the Pacific theater, and it would last nearly 3 months and wind up being the fiercest in the Pacific theater during the war, with nearly 60,000 American casualties and over 100,000 Japanese soldiers killed. In addition, the battle resulted in an estimated 40,000-150,000 Japanese civilian casualties. N° de réf. du vendeur APC9781979992800

Island Hopping across the Pacific Theater in World War II: The History of America's Victorious Leapfrogging Strategy against Imperial Japan

Island Hopping across the Pacific Theater in World War II: The History of AmericaaTMs Victorious Leapfrogging Strategy against Imperial Japan