The military architecture of ancient Chorasmia 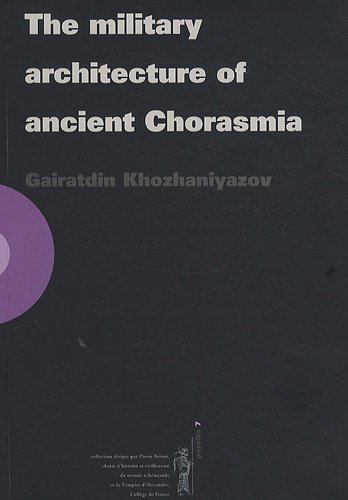 Description du livre Couverture souple. Etat : Neuf. Edition originale. Chorasmia was the northernmost of the oasis lands of ancient Central Asia. It lay about the delta of the Amu-dar'ya River, the classical Oxus, from which it derived its livelihood. Its isolation among the lands of the Eurasian nomads, together with the depredations of the Mongols, and after them the Timurid armies, has preserved a unique legacy of standing remains without parallel elsewhere in Central Asia. In no other place is the pre-Islamic military architecture of an entire land still visible above the ground. The Military Architecture of Ancient Chorasmia is the outcome of many years of fieldwork by Gairatdin Khozhaniyazov. This is the first time since S.P. Tolstov's 1953 publication in translation of Po sledam drevne-khorezmiiskoi tsivilizatsii, and Frumkin's 1970 Archaeology in Soviet Central Asia that a comprehensive study of Chorasmian fortifications has been made available to the English-speaking world. Based on his study of the abundant and remarkably preserved examples to be found across Karakalpakstan and Khorezm, Khozhaniyazov proposes the existence of a Chorasmian school of military architecture that developed between about the 6th century B.C. and the 4th century A.D. Originally written in Russian, the work has been translated, edited and emended by Svend Helms. Chorasmian fortifications are remarkably elaborate and questions arise as to why they were built, where the design ideas came from, and against whom were they meant to defend. Ancient Chorasmia remained generally isolated from political and military events to the south from the 5th century B.C. up to the 1st century A.D. and the rise of the Kushan empire. Thus, the chief threat to Chorasmia must have been the nomadic tribes such as the Massagetae and elements of the Saca, among others. Many of the fortifications were built to defend the desert frontiers of the irrigated lands. These issues are discussed in an appendix by Alison Betts. Gairatdin Khozhaniyazov graduated in 1972 from the Faculty of History of the Karakalpak State Pedagogical Institute. From 1974-1978 he studied in the Faculty of Archaeology of Moscow State University Lomonosov. In 1996 he successfully defended his thesis Fortifications of ancient Khorezm (6th century BC _ 4th century AD). He has worked for 33 years as an active field archaeologist in Karakalpakstan, as well as in the wider region, including the Crimea and the Lower Volga. He has directed numerous field projects in Karakalpakstan and has produced over a hundred publications and field reports. He is an expert in the history of ancient and medieval Khorezm and is currently head of the Department of Archaeology in the Institute of History, Archaeology and Ethnography, Karakalpak Branch of the Academy of Sciences of the Republic of Uzbekistan. He also lectures in the Karakalpak State University. In 2003 he was honoured with the State Award Mechnat Schuchrati of the Republic of Uzbekistan in recognition of his scientific and academic achievements. 800g. N° de réf. du vendeur 13519