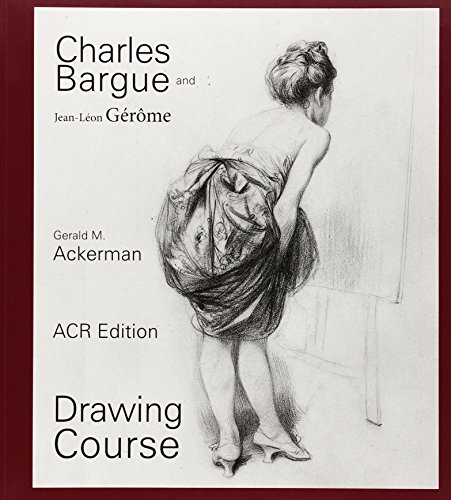 The History of the Drawing Course

The Bargue-Gérôme Drawing Course (Cours de dessin), reproduced here in its entirety, is a famous and fabled publication of the late nineteenth century. Divided into three parts, it contains 197 loose-leaf lithographic plates of precise drawings after casts, master drawings, and male models, ail arranged in a somewhat progressive degree of difficulty. The course was designed to prepare beginning art students copying these plates to draw from nature, that is, from objects, both natural and man-made, in the real world. Like the curriculum of the nineteenth-century École des Beaux-Arts in Paris, whose ideals it shared, it was designed so that the student using it could eventually choose to render nature in both idealistic and realistic fashions. When the Drawing Course was published in the late 1860s, it was still generally assumed that the imitation of nature was the principal goal of the artist, and that the most important subject for the artist was the human body. The expression of the subject depicted had not yet been replaced by self-expression.
Despite being both rare and arcane today, the Bargue-Gérôme Drawing Course is one of the most significant documents of the last great flowering of figure painting in western art, which took place in the late nineteenth century. The present complete new edition will serve to instruct contemporary students in figure drawing, to present an important nineteenth-century document to historians, and to edify the general art-loving public, collectors, and amateurs.
The plates in the Drawing Course are modèles, which in English would be translated as "good examples to copy." The course follows the established routine in nineteenth-century art schools by beginning with the copying of plaster casts, proceeding to master drawings, and finishing with nude male models (académies). Since this tripartite division of activities was taken for granted in the curricula of the time, the plates were issued without instructions. Relying on the expertise of contemporary teachers and practitioners of academic figure drawing, the present editors have tried to indicate how these plates might be taught in classes and used by individual students today. Throughout, every attempt has been made to explain nineteenth-century drawing theory and practice.
The present book also introduces the figure of Charles Bargue (1826/27-1883), a lithographer and painter known now only to a small group of connoisseurs, collectors, and art students. An attempt has been made to clear his life of legend and to write a biography based upon the scant surviving evidence. His painted oeuvre is small, and only about fifty titles have been recorded. Of those, only half have been located, most of which are in private collections. His Drawing Course is known to only a few through stray and scattered surviving sheets and from the hitherto only known complete set of the Drawing Course in the National Art Library Victoria and Albert Museum, London. In 1991 two further complete sets were made public as a result of the founding of the Musée Goupil in Bordeaux. The plates reproduced in this book were selected from these two sets. To make the introduction to Bargue more complete, an illustrated and annotated listing of ail his known paintings has been included as well.

This book is a complete reprint of the fabled but rare Drawing Course (Cours de Dessin) of Charles Bargue and Jean-Léon Gérôme, published in Paris in the 1860s and 1870s. For most of the next half-century, this set of nearly 200 masterful lithographs was copied by art students Worldwide before they attempted to draw from a live model. This book will be valuable to a wide range of artists, students, art historians and collectors, even as it introduces them to the hitherto-neglected master, Charles Bargue. The Drawing Course is separated into three sections, in an ascending order of difficulty. The first section consists of lithographs by Bargue after casts of sculptures, mostly antique examples that present the structure of the human body with remarkable clarity and intelligence. The second part contains the lithographs that Bargue made after master drawings by Renaissance and modem artists, and the third section almost 60 exemplary drawings of nude male models.

Experienced artists will recognize the skill and insight with which Bargue solved problems of drawing from nature; they will want to copy these plates to sharpen their professional skills. For art students, the Drawing Course is a practical introduction to realistic drawing based on the observation of nature, a course blissfully free of the usual charts and schemata requiring memorization and often producing stultification. For art historians, the Drawing Course documents the longstanding tradition of accurate draftsmanship prized by the late nineteenth-century figure painters who stood at the convergence of classicism and realism.

This volume concludes with a biography of Charles Bargue and a preliminary catalogue of his paintings, accompanied by reproductions of works both located and lost. Bargue started his career as a lithographer reproducing the drawings of commercial illustrators for a popular market in comic, sentimental and erotic subjects. By working with Gérôme, and by preparing the plates for this Drawing Course, Bargue was transformed into a superb painter, equipped with the skills to match his taste, talent and ideas. He became a master of telling details and exquisite tonal harmonies. Gerald Ackerman is a well-known scholar of academic art of the nineteenth century. He is the author of several books published by ACR Edition. Most renowned is The Life and Work of Jean-Léon Gérôme, of which a third French edition is in preparation {La Vie et l'oeuvre de Jean-Léon Gérôme, Paris, 2000), as is a paperback condensation in English (Jean-Léon Gérôme, His Life, His Work). Mr. Ackerman has also published Les Orientalistes de l'Ecole britannique and American Orientalists.

His collaborator on this volume is Graydon Parrish, the figure painter well known for his widely reproduced allegory, Remorse, Despondence, and Acceptance of an Early Death (1997-1999, Mead Art Museum, Amherst College, Massachusetts).