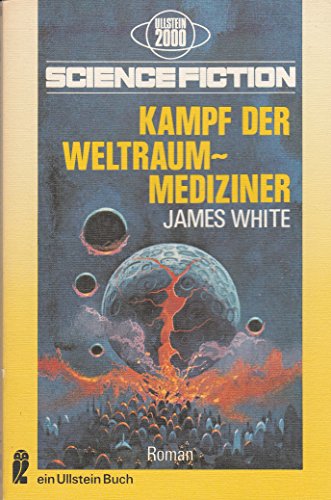 Description du livre Taschenbuch. Kartoniert. Etat : Gut. Erste Auflage dieser Ausgabe. 158 Seiten. 18 cm. Seiten papierbedingt leicht gebräunt. Buchkanten etwas berieben. Befriedigender Zustand. - James White (7 April 1928 - 23 August 1999) was a Northern Irish author of science fiction novellas, short stories and novels. He was born in Belfast and returned there after spending his early years in Canada. After a few years in the clothing industry, he worked at Short Brothers Ltd. from 1965 until taking early retirement in 1984 as a result of diabetes. White married Margaret Sarah Martin, another science fiction fan, in 1955 and the couple had three children. He became a fan of the genre in 1941 and co-wrote two fanzines, from 1948 to 1953 and 1952 to 1965. Encouraged by other fans, White began publishing short stories in 1953, and his first novel appeared in 1957. His best-known novels were the twelve in the Sector General series, the first appeared in 1962 and the last after his death of a stroke. White also published nine other novels, two of which were nominated by major awards, unsuccessfully. White abhorred violence, and medical and other emergencies were the sources of dramatic tension in his stories. He was regarded as a second-rank writer, who occasionally produced first-rank works, and his plots and writing were often formulaic. However, the "Sector General" series is regarded as defining the genre of medical science fiction, and as introducing "the most memorable crew of aliens ever created". Although narrowly missing winning four times in the most prestigious honours, White gained other awards for specific works and for contributions to science fiction. He was also was Guest-of-Honour at many conventions. . Sector General: Hospital Station (1962), the first book in James White's "Sector General" seriesThe Sector General series consists of 12 books originally published between 1962 (Hospital Station) and 1999 (Double Contact). Additional short stories set in the Sector General Universe (Countercharm, Tableau, Occupation: Warrior, and Custom Fitting) appear in other collections by White. Sector General is a gigantic multi-species hospital space station founded as a peace-making project by two heroes from opposite sides of humanity's only full interstellar war. The hospital accommodates patients and staff from dozens of species, with different environmental requirements, behaviors and ailments. Initially most of the stories center round the career of Doctor Conway, who rises from junior surgeon to Diagnostician. In the fourth book the Galactic Federation decides that the emergency service which the hospital offers to victims of space accidents and planetary catastrophes is the most effective means of making peaceful contact with new spacefaring species, which allows the series to expand its range of plots, characters and settings. The seventh and later books each have a different and usually alien viewpoint character, which gave them "considerable new pep". They also expand the range of issues beyond purely medical, and in Mike Resnick's opinion handle deeper issues such as guilt and forgiveness better than most science fiction. The series defined the sub-genre of multi-species medical stories, and was "the first explicitly pacifist space opera" series, when much of contemporary space opera from the USA was notably military. . . wikipedia-org-wiki-James_White_(author). Aus: wikipedia-org Sprache: Deutsch Gewicht in Gramm: 150 Zukunftsroman, Zukunft, Fortschritt, Zukunftstechnologien, Futurologie, Zukunftsromane, Utopischer Roman, Utopie, Futurismus, Phantastik, Phantastische Literatur, Science Fiction, Zukunftsvisionen, Raumfahrt, Utopische Romane, Weltall, Romanzyklus. N° de réf. du vendeur 41391