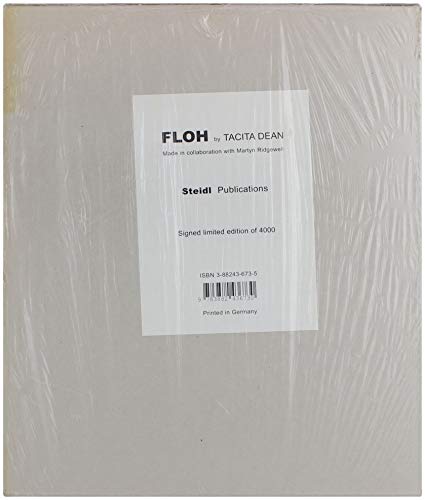 Description du livre Steidl Verlag, Göttingen, Germany, 2001. Hardcover. Etat : New. 1st Edition. First edition, first printing. Limited edition of 4000 hand-numbered and signed hardbound copies. Linen-covered boards with debossed title, in slipcase (with printed title plate pasted on), no dust jacket as issued. Found photographs by Tacita Dean. Made in collaboration with Martyn Ridgewell. 176 pp., including two 2-page gatefolds, with 48 four-color and 108 black and white plates. 12 x 9-3/4 inches. [Cited in Andrew Roth, ed., The Open Book. (Göteborg, Sweden: Hasselblad Center in association with Steidl Verlag, Göttingen, Germany, 2004), and in Martin Parr and Gerry Badger, The Photobook: A History, Volume II. (London and New York: Phaidon, 2006).]. New in publisher's shrink-wrap. From the publisher: "The images in FLOH are photographs discovered by Tacita Dean in flea markets across Europe and America. These portraits, holiday snapshots, documents of banal occurrences or spectacular views have all been retrieved and given a new existence. They keep the silence of the flea market; the silence they had when they were found; the silence of the lost object. This, however, is found photography with a twist. In FLOH it is presented as art: beautifully printed in a linen cover, slipcased volume, and each copy of the book is signed and numbered by the artist. Eventually, Tacita Dean stopped going to flea markets for fear of finding an image that 'should have been in the book,' but then resolved to believe that there isn't, and can never be, a final version to this collection. FLOH exists in the continuum and will one day return ownerless and silent to its origins in the flea market." Signed by Author. N° de réf. du vendeur 111753