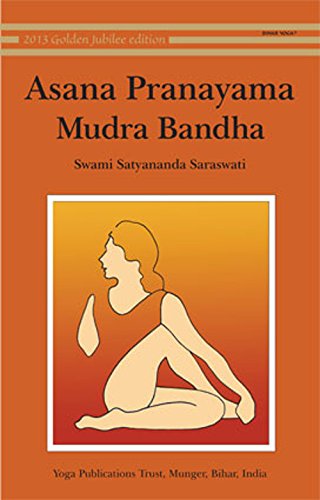 Excellent book which explains to some degree the "inner posture" with each asana discussed. Unlike most books, you can actually perform the asana from the instructions in this book alone. Stops short of explaining the effect of the various asanas on the Doshas (in Ayurveda) but does list the benefits of the poses. A must have book for any student of hatha yoga --By A Customer on July 12, 2002

There are innumerable books on yoga to be found; some emphasising the practical aspects with postures (asana), complete with colour photos - and some impossibly esoteric, meant for the select few with mystical leanings. This book combines a comprehensive overview of asana; while at the same time giving clear explanations of the deeper aspects of yoga, including breathing (pranayama), body attitudes (mudra), energy locks (bandha), energy centres (cakra), and yogic cleansing (hatha yoga). The roots of yoga are in the ancient vedic and tantric texts; many of which have remained inaccessible to western readers until the last century. Much of the teachings were kept secret; firstly, because they had been banned by a Hindu priesthood that felt threatened by anarchic schools of self-liberation; and secondly, for fear that the powerful techniques could be misused by misguided opportunists. Swami Satyananda Saraswati was one of the renegades who shocked the yogic establishment by not only translating the texts and teaching the techniques to western students; but then went on to publish an entire series of books, clarifying and promoting yoga in an unprecedented way. Satyananda's other significant move was to bring yoga into the domain of medical science, and explain esoteric techniques in terms of western anatomy and physiology. He started the Bihar Yoga Bharati, which offers undergraduate and postgraduate studies in subjects like Yoga Psychology and Applied Yoga Science; and initiated the Yoga Research Foundation which studies the medical effects of yoga. --By Gerald Lopez on November 7, 2005

Swami Satyananda was born at Almora in 1923.In 1943 he met Swami Sivananda in Rishikesh and adopted the Dakshnami sanyasa way of life. In 1955 he left his guru's ashram to live as a wandering mendicant and later founded the International Yoga Fellowship in 1963 and the Bihar School Of Yoga in 1964.Over the next twenty 20 years Swami Satyananda toured internationally and authored over 80 books. In 1987 he found Satyannada Math,a charitable institution for aiding rural development, and the Yoga Research Foundation. In 1988 he renounced his mission, adopting khestra sanyasa, and now lives as a paramahansa sannyasin.

Description du livre Soft cover. Etat : New. Revised Edition. Asana Pranayama Mudra Bandha is recognised internationally as one of the most systematic yoga manuals available today. Since its first publication by the Bihar school of Yoga in 1969, it has been reprinted thirteen times and translated into many languages. It is the main reference text used by Yoga teachers and students of Bihar Yoga - Satyananda Yoga within the International Yoga Fellowship Movement, and many other traditions as well. This comprehensive text provides clear illustrations, step by step directions and details of chakra awareness. It guides the practitioner or teacher from the simplest to the most advanced pratices of the hatha yoga system. A therapeutic index is included for use by doctors and yoga therapists incorporating recent information from research into yoga. This edition successfully brings the exposition of Yoga practices to the standard of a university text. N° de réf. du vendeur 1150771