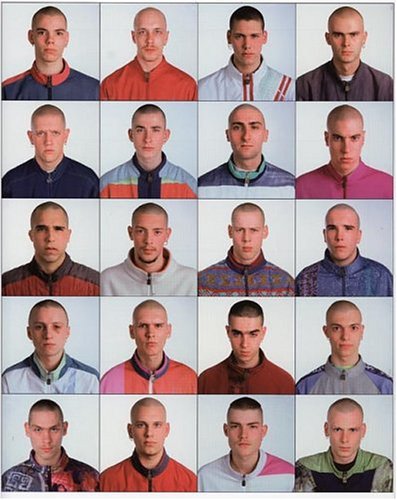 Inspired by interest in the striking dress codes of various social groups, Rotterdam-based photographer Ari Versluis and stylist Ellie Uyttenbroek have systematically documented numerous identities. They call their series 'Exactitudes': a contraction of 'exact' and 'attitude'. By registering their subjects in an identical framework they provide an almost scientific record of people's attempts to distinguish themselves from others by assuming a group identity. The apparent contradiction between individuality and uniformity is taken to such extremes that the artistic aspect dominates the purely documentary element. Rotterdam's heterogeneous street scene remains a major source of inspiration for them, although they have also worked in South America, Asia and Africa. This year they will travel to the Cape Verde Islands.

Description du livre Hardcover. Etat : Near Fine. Etat de la jaquette : Very Good Plus. 2nd Edition. Stated Second Edition. This is a very hard-to-find book. And it's a hoot. Do a little research if you're not familiar with it. There have been a number of editions. Only a few of the Firsts (2002) are for sale. I believe mine will be the only Second Edition (2004) for sale anywhere on the Internet. This book is in Near Fine condition and has the rare dust jacket (which is especially important since the book's covers are mainly white). The dust jacket is in very good condition. So I am able to say that the mainly white covers are entirely clean, no spots, no soiling. The covers show very minimal wear, just a little bit of bend at the spine ends, and a couple of bump/dents on the bottom edge of the rear cover (you'll have to turn the book upside down to see them). The interior of the book is also in excellent condition. The pages are exceptionally clean. No one has written their name or anything else on any page. There aren't any markings or creases or dogeared corners. And the book is very solidly bound, no issues. The dust jacket maintains the theme of cleanliness. I don't see any soiling. There is one very tiny tear off the bottom edge and one off the top edge of the rear cover right next to the spine. There's also a little wrinkle at each spine end and there's a slight lifting up of a little bit of the cellophane like material off the bottom edge of the rear cover. The white dust jacket flaps have no printing on them at all. They are not clipped. They are absolutely clean. All in all it's a very nice looking dust jacket. Take a look at the photographs. It is a bit wider than the surface of my scanner. The dust jacket will be fitted with a protective cover. 'Photographer Ari Versluis and profiler Ellie Uyttenbroek have worked together since October 1994. Inspired by a shared interest in the striking dress codes of various social groups, they have systematically documented numerous identities over the last 21 years. Rotterdam?s heterogeneous, multicultural street scene remains a major source of inspiration for Ari Versluis and Ellie Uyttenbroek, although since 1998 they have also worked in many cities abroad. They call their series Exactitudes: a contraction of exact and attitude. By registering their subjects in an identical framework, with similar poses and a strictly observed dress code, Versluis and Uyttenbroek provide an almost scientific, anthropological record of people?s attempts to distinguish themselves from others by assuming a group identity. The apparent contradiction between individuality and uniformity is, however, taken to such extremes in their arresting objective-looking photographic viewpoint and stylistic analysis that the artistic aspect clearly dominates the purely documentary element. Photographer Ari Versluis and stylist Ellie Uyttenbroek have long started Exactitudes, a project that, put it simply, is a striking visual record of more than three thousand neatly differentiated social types the artists have documented over the last twenty years. Started in 1994 in the streets of Rotterdam, this overarching and on-going project portrays individuals that share a set of defining visual characteristics that identifies them with specific social types. Be it Gabbers, Glamboths, Mohawks, Rockers or The Girls from Ipanema, Versluis and Uyttenbroek?s extremely acute eye allows them to discern specific dress codes, behaviors or attitudes that belong and characterize particular urban tribes or sub-cultures. Once they recognize an individual that fits the characteristics of a given group, they invite such person to be photographed at the studio with the only requirement of wearing the very exact same clothes s/he was wearing at the time they first encountered.' Google for more info. N° de réf. du vendeur 000951

Description du livre Hardcover. Etat : Good. No Jacket. Item is in good condition. Some moderate creases and wear. This item may not come with CDs or additional parts including access codes for textbooks. This may not have a dust jacket. Might be an ex-library copy and contain writing/highlighting. Photos are stock pictures and not of the actual item. N° de réf. du vendeur DS-9064504555-3

Description du livre Hardcover without dustjacket as issued, unpaginated; very good condition; white covers have some scattered scuffs and small stains; no internal marks. The 1st edition of this book that starts with #58: Toppers and ends with #1: Gabbers. Foreign shipping may be extra. N° de réf. du vendeur ExVe01450