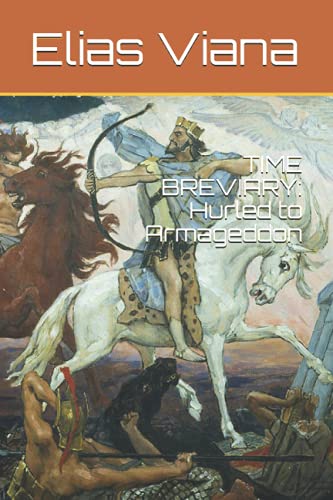 Description du livre Paperback. Etat : New. Language: English. Brand new Book. Preface: Revelation 16:1-21 TIME BREVIARY: 1st Breviary 2:14 PM"The Death of History and the Last Man" TIME BREVIARY: 2nd Breviary 2:16 PM"The Death of Reason" TIME BREVIARY: 3rd Breviary 11:37-38"The Death of Liberalism" TIME BREVIARY: 4th Breviary 6:8 pm"The Death of Faith" TIME BREVIARY: 5th Breviary 24:22"The death of death" Bibliographies TIME BREVIARY: Hurled to Armageddon. Armagedăo.Armagedom.Har M?giddô Monte Megido.Harmaged?nArmaged?n The disorientation makes them think in apocalyptic terms, as if the narrative's failure to reach its happy ending can only mean it's being hurled into Armageddon. Unable to ascertain reality, the mind fixates on catastrophic scenarios. Yuval Noah Harari: 21 Lessons for the 21st Century. We must not forget that the great enemy to come is Antichrist. He is not an anti-non-Christ. He is Antichrist. More and more, in these last few years, the term "Jesus", stripped of its biblical content, has become the enemy of the Jesus of history, the Jesus who died and rose again and will come a second time, the eternal Son of God. So let us be careful. If evangelical Christians begin to yield to the dichotomy, separating the encounter with Jesus from the content of the Scriptures (including the debatable and the verifiable), unwillingly, however, we will be throwing both ourselves and the next generation into the maelstrom of the modern system. This system surrounds us like an almost monolithic consensus. Francis Schaeffer, The Death of Reason, p. 37 If we don't have a Narrative for that moment, Yuval Noah Harrari, then modern man will be swallowed up by Dataism, Algorithms, by the machine: "The freedom that was sought was an absolute freedom, without limitations. There is no God, not even a universal, limiting him, so that the individual seeks to express himself with complete freedom and yet, at the same time, he feels the condemnation of being absorbed in the machine. This is the tension of modern man". Francis Schaeffer, The Death of Reason, p. 27. N° de réf. du vendeur AAV9798538990382