Scott, Ernest Terre Napoleon: A History of French Explorations and Projects in Australia

Terre Napoleon: A History of French Explorations and Projects in Australia 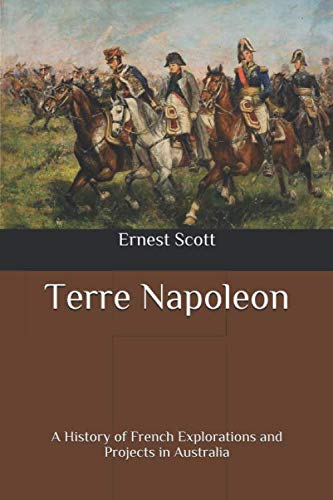 1. Terre Napoleon: A History of French Explorations and Projects in Australia (Paperback)

Description du livre Paperback. Etat : New. Language: English. Brand new Book. Australia is the only considerable portion of the world which has enjoyed the blessed record of unruffled peace. On every other continent, in nearly every other island large in area, "war's red ruin writ in flame" has wrought its havoc, leaving evidences in many a twinging cicatrice. Invasion, rebellion, and civil war constitute enormous elements in the chronicles of nations; and Shelley wrote that the study of history, though too important to be neglected, was "hateful and disgusting to my very soul," because he found in it little more than a "record of crimes and miseries." A map of the globe, coloured crimson as to those countries where blood has flowed in armed conflicts between men, would present a circling splash of red; but the vast island which is balanced on the Tropic of Capricorn, and spreads her bulk from the tenth parallel of south latitude to "the roaring forties," would show up white in the spacious diagram of carnage. No foreign foe has menaced her thrifty progress since the British planted themselves at Port Jackson in 1788; nor have any internal broils of serious importance interrupted her prosperous career.This striking variation from the common fate of peoples is attributable to three causes. First, the development of a British civilisation in Australia has synchronised with the attainment and unimpaired maintenance of dominant sea-power by the parent nation. The supremacy of Great Britain upon the blue water enabled her colonies to grow to strength and wealth under the protection of a mighty arm. Secondly, during the same period a great change in British colonial policy was inaugurated. Statesmen were slow to learn the lessons taught in so trenchant a fashion by the revolt of the American colonies; but more liberal views gradually ripened, and Lord Durham's Report on the State of Canada, issued in 1839, occasioned a beneficent new era of self-government. The states of Australia were soon left with no grievance which it was not within their own power to remedy if they chose, and virtually as they chose. Thirdly, these very powers of self-government developed in the people a signal capacity for governing and being governed. The constitutional machinery submitted the Executive to popular control, and made it quickly sensitive to the public will. Authority and subjects were in sympathy, because the subjects created the authority. Further, there was no warlike native race in Australia, as there was in New Zealand and in South Africa, to necessitate armed conflict. Thus security from attack, chartered autonomy, and governing capacity, with the absence of organised pugnacious tribes, have combined to achieve the unique result of a continent preserved from aggression, disruption, or bloody strife for over one hundred and twenty years. N° de réf. du vendeur APC9798662610941