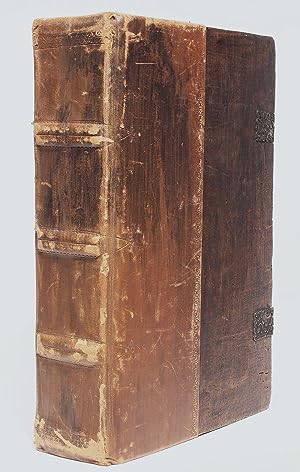 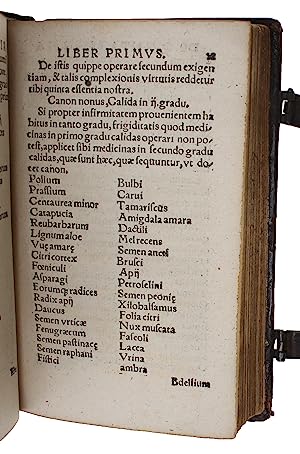 Description de l'article : (Argentorati (Strassbourg) apud Balthassarum Beck), 1541. Small 8vo. Contemporary full calf binding with brass clasps. Professionally and neatly re-backed. Title-page a bit soiled and three very small holes to first leaf of text, otherwise internally very nice, clean and fresh. Early 20th century book-plate to front free end-paper (depicting Aristotle and Plato and with Greek writing). One full-page and 7 half-page woodcut illustrations in the text. (4), 183, (4 - Index) ff. The very rare first edition edition thus, being the first edition edited by the celebrated Strasbourg physician Walter Hermann Ryff (reprinted in Venice in 1542). The book contains two works: Lull's "De secretis naturae" and Albert the Great's "De mineralibus & rebus metallicus", which is among the authentic writings of the author; both works are of the utmost importance and greatly influenced Renaissance philosophy and science: Lull invented an "art of finding truth" (often in Lullism referred to as "The Art"), which centuries later stimulated Leibnitz' dream of a universal algebra. Lull applied this to basically all subjects studied at the Medieval Universities. "Lull's metaphysics worked a revolution in the history of philosophy" (The Cambridge History of Renaissance Philosophy, p. 548). "The production of pseudo-Lullian alchemical texts culminated at the end of the fourteenth century with an important work, the "Liber de secretis naturæ sive de quinta essential". At that time the formation of this corpus of texts entered a second stage. In the "Liber de secretis naturæ" the alchemical practice of the Testamentum becomes linked to the fifth essence of wine, a distillation technique popularized in by Jean de Roquetaillade in 1350. Moreover, its author said on several occasions that he relied on the Testamentum and other alchemical texts, thus recognizing Lull as an alchemist. If the "Liber de secretis naturæ sive de quinta essential" seems to be a medical book guided by the thought and the style of Lull, it is also notable for its author's interest in turning matter into gold, unlike John Roquetaillade who for religious reasons was not mainly interested in such transmutation. It begins with a prologue consisting of a conversation between Lull and a monk, then come the two books paraphrasing Roquetaillade's De quinta essentia. It ends with a Tertia distinctio devoted to an alchemical application of the Lullian method (alphabets and trees). Even if the "Liber de secretis naturæ sive de quinta essential" suffered, like a number of alchemical works, from a very unreliable textual tradition in both manuscript and printed form, it enjoyed great success in the sixteenth century."His works on occult philosophy were essential to Renaissance magic. "As the inventor of a method which was to have an immense influence throughout Europe for centuries, Lull is an extremely important figure. Lullism is a precursor of scientific method. Lullian astral medicine developed into Pseudo-Lullian alchemy. The great figures of Renaissance Neoplatonism include Lulliiam in their interests, and naturally so since Lullism was the precursor of their ways of thinking. And from the point of history of religion and of religious toleration, surely we admire Lull's vision in taking advantage of the unique concentration of Christian, Moslem, and Jewish traditions." (Yates, The Occult Philosophy in the Elizabethan Age).The present work also contributed greatly to what later was to become known as Christian Kabbalah. Living in a region where the Catholic Church was dominant, where a large part of the land was still under heavy influence from Moslem Arabs, and where the Jews made important contributions to the culture, Lull sought to unify all three religions by developing a (natural) philosophy incorporating elements common to all. These rather unorthodox, and to some extent heretical, thoughts were later taken up by the Italian Renaissance philosopher Pico della Mirandola (1463-94). He and many of his contemporaries believed to have discovered in Kabbalah a lost divine revelation that could give the key to understanding both the teachings of Pythagoras, Plato, and the Orphics, as well as the inner secrets of Catholic Christianity. Pico della Mirandola had a considerable amount of Kabbalistic literature translated into Latin by the convert Samuel ben Nissim Abulfaraj.Raymond Lull (ab. 1232 - 1315), Majorcan writer, philosopher, memorycian (he was later to become a great source of inspiration for Giordano Bruno), logician, and a Franciscan tertiary. He wrote the first major work of Catalan literature. Recently-surfaced manuscripts show him to have anticipated by several centuries prominent work on elections theory. He is sometimes considered a pioneer of computation theory, especially given his influence on Gottfried Leibniz. He is also well known also as a glossator of Roman Law. Lull taught himself Arabic with the help from a slave. As a result, he wrote his "Ars Magna", which was intended to show the necessary reasons for the Christian faith. To promote his theory and test its effectiveness, he went to Algiers and Tunis. At the age of 82, in 1314, Lull traveled again to North Africa, where an angry crowd of Muslims stoned him in the city of Bougie. Genoese merchants took him back to Mallorca, where he died at home in Palma the following year.Despite the fact that a large corpus of the printed works by Lull are erroneously ascribed to him:" On the whole, we get the impression that the "Testament", "De secretis naturae seu de quinta essential", and "Lapidarius" are probably the oldest members of the Lullian alchemical collections" (Thorndyke)The present Ryff-edition became very popular and later appeared numerous times. It was reprinted already the following year in Venice, 1542, and editions followed in Nürnberg, 1546, Basel, 1561, Köln, 1567, etc. etc.Freilich: 372Adams: L, 1703Honeyman: v, 2064AWellcome: 3897. N° de réf. du vendeur 41454