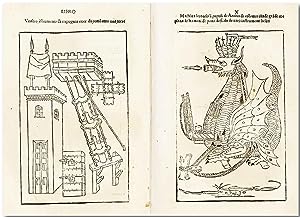 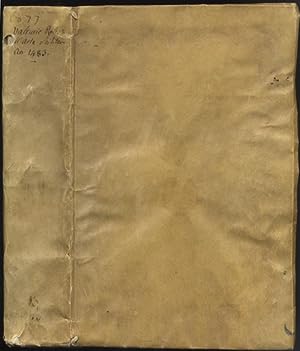 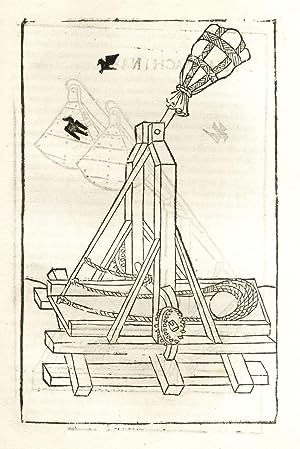 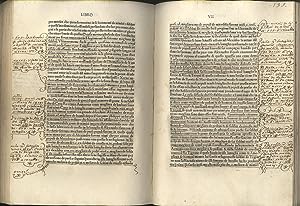 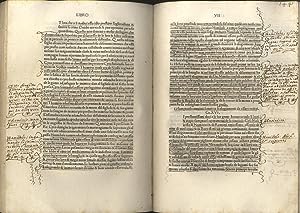 Chancery folio (302x208 mm). Collation: [*]6, a-d8, e6, f&ndash;g8, h10, i-u8, x-y6, z8, e8, cum6, rum6, A-B6, C-E8, F-G6, H-I8, K10, L-N8, O10. 312 of [314] leaves, lacking fols. [*]1 and O10 blanks, whereas the blank a8 is present. Text in one column, 36 lines and headline. Type: 2:114R, 1:90G. Two- to nine-line blank capital spaces, a few with printed guide letters. Ninety-five woodcuts, many full-page (including one repeat). Sixteenth-century limp vellum, inked title on the spine. A fine, wide-margined copy, repair to the lower gutter of the first five leaves. Numerous marginalia in a sixteenth century hand; the same hand has annotated an index of subjects on four added leaves.A fine copy of the very rare first Italian translation of the most famous treatise on military art ever written. It is the first vernacular edition of one of the earliest scientific works ever printed, and the earliest to contain technical illustrations, showing in detail the equipment necessary for ground and naval warfare. "The historical importance of the De Re Militari lies in the fact that it is the first book printed with illustrations of a technical or scientific character depicting the progressive engineering ideas of the author's own time. The woodcuts illustrate the equipment necessary for the military and naval engineer [.] The Verona Valturius and its reprints were the handbooks of the military leaders of the Renaissance, and Leonardo da Vinci, when acting as chief engineer to Cesare Borgia, possessed a copy and borrowed some of its designs" (PMM). The De re militari was composed between 1455 and 1460 by Roberto Valturio, a military engineer and technical adviser at the Rimini court, on behalf of his patron Sigismondo Pandolfo Malatesta (1417-1468). The treatise enjoyed immediate success and was widely circulated in manuscript form (see no. 178). The work first appeared in print in 1472, from the Verona press of Johannes Nicolai: this was a splendid volume supplemented with eighty-two woodcuts illustrating an astonishing array of tools and war machines. These illustrations were likely executed after designs by the medalist Matteo de' Pasti (ca. 1412 - after 1467), who had been a pupil of Leon Battista Alberti, and was also in the service of Sigismondo Malatesta. A second edition appeared on 13 February 1483, followed four days later by the first Italian translation; both these editions were likewise printed in Verona. Their printing may have been financed by the Veronese Bassano Medici, son of Niccolň, the wealthy patron of the arts. The edition in Italian vernacular is rarer than both Latin publications. The volume opens with a dedicatory epistle by the editor and translator from Treviso Paolo Ramusio &ndash; active as a magistrate 'ad banchum Regine Leone' at Verona, and father of the more famous geographer Giovanni Battista &ndash; to the well-known condottiero Roberto di San Severino (1418-1487). The text is illustrated with reduced copies of the woodcuts used in the first edition of 1472, apart from one woodcut on fol. r1r, which is entirely new and depicts two soldiers seated in a tent; their sequence does however differ slightly from that first Veronese edition. The woodblocks were likely cut by one of the artists then active in the city, such as Fra' Giovanni Olivetano, Giovanni Zebellana, or a member of the Golfino dynasty. The Italian Valturio was skilfully printed by Bonino de Boninis from Ragusa (Dalmatia), who was active in Verona between 1481 and 1483. It is the last of the seven books printed by him in Verona, before his move to Brescia, where he printed the famous illustrated edition of Dante's Commedia.HC 15849; GW M49416; BMC VII, 952; IGI 10116; Goff V-90; Rhodes Verona 19; Norman 2127; Sander 2483; PMM 10; T. Radakiewicz, "The editio princeps of R. Valturio's De re militari", Maso Finiguerra, 18-19 (1940), pp. 15-82; A. Campana, "Felice Feliciano e la prima edizione del Valturio", ibid., pp. 211-222; S. Ricossa &ndash; N° de réf. du vendeur 0000000008250

PrPh Books was established in New York in 2013 by Italian booksellers Umberto Pregliasco (from the namesake bookshop) and Filippo Rotundo (of Philobiblon). Many precious books have passed through our hands since then, and stimulating projects have been undertaken. Throughout these activities, our focus remains on what makes an object unique and the distinctive features of individual copies, all of exceptional value in some way: the rarity of an edition, the magnificence of its illustrative apparatus, the preciousness of its binding, the eminence of its provenance.