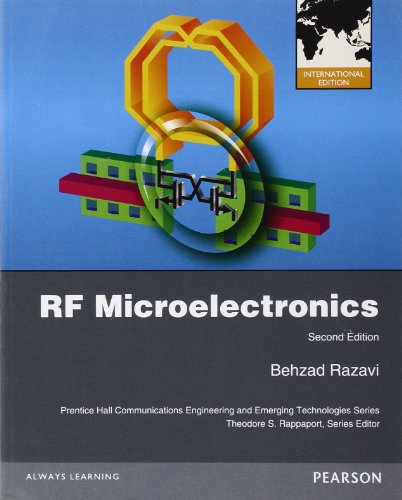 The Acclaimed RF Microelectronics Best-Seller, Expanded and Updated for the Newest Architectures, Circuits, and Devices

Wireless communication has become almost as ubiquitous as electricity, but RF design continues to challenge engineers and researchers. In the 15 years since the first edition of this classic text, the demand for higher performance has led to an explosive growth of RF design techniques. In RF Microelectronics, Second Edition, Behzad Razavi systematically teaches the fundamentals as well as the state-of-the-art developments in the analysis and design of RF circuits and transceivers.

Razavi has written the second edition to reflect today’s RF microelectronics, covering key topics in far greater detail. At nearly three times the length of the first edition, the second edition is an indispensable tome for both students and practicing engineers. With his lucid prose, Razavi now

Behzad Razavi, Professor of Electrical Engineering at UCLA, leads the Communication Circuits Laboratory (CCL). Emphasizing the use of mainstream CMOS technologies, CCL's research seeks and exploits new devices, circuits, and architectures to push the performance envelope. Razavi holds a BSEE from Sharif University of Technology and MSEE and PhDEE degrees from Stanford. He was with ATT Bell Laboratories and HP Labs until 1996. An IEEE Distinguished Lecturer and IEEE Fellow, his books include Design of Analog CMOS Integrated Circuits, Design of Integrated Circuits for Optical Communications, and Fundamentals of Microelectronics.