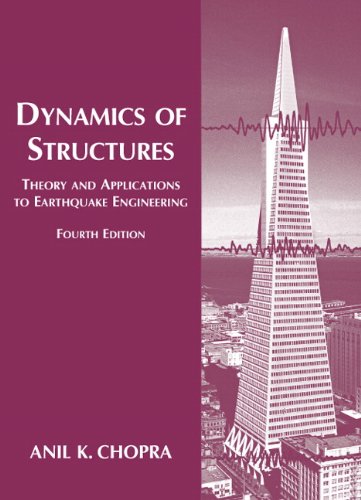 Designed for senior-level and graduate courses in Dynamics of Structures and Earthquake Engineering. Dynamics of Structures includes many topics encompassing the theory of structural dynamics and the application of this theory regarding earthquake analysis, response, and design of structures. No prior knowledge of structural dynamics is assumed and the manner of presentation is sufficiently detailed and integrated, to make the book suitable for self-study by students and professional engineers.

After serving as an Assistant Professor at the University of Minnesota, Minneapolis, he joined the faculty at the University of California, Berkeley where he has served as Assistant Professor (1967-71), Associate Professor (1971-76), Professor (1976- ), Vice Chair (1980-83) and Chair (1991-93, 1994-97) of the Structural Engineering, Mechanics and Materials program in the Department of Civil and Environmental Engineering. He has been responsible for the development and teaching of courses in structural engineering, structural dynamics, and earthquake engineering.

His research activities have included studies of structural dynamics, various problems in earthquake analysis and design of buildings, dynamic soil-structure interaction, dynamic fluid-structure interaction, and earthquake analysis and design of concrete dams. He has authored more than 300 published papers on this work, a monograph, Earthquake Dynamics of Structures, A Primer, 2005, and a textbook, Dynamics of Structures: Theory and Applications to Earthquake Engineering, 1995, 2001, and 2007.

Description du livre Pearson, 2011. Soft cover. Etat : New. 4th Edition. Brand New International Edition textbook. Some book may show sales disclaimer such as "Not for Sale or Restricted in US" on the cover page but it is absolutely legal to use in US or Canada. Ship from Multiple Locations, including Asia , Hong Kong ,Taiwan , US or Canada depend on stock location. N° de réf. du vendeur 000546

Description du livre Paperback. Etat : New. This is printed on High-Quality acid free paper "Brand New International Edition" Textbook which has different ISBN and Cover design than US Edition but same contents as the US edition. Some book may show sales disclaimer such as "Not for Sale or Restricted in US" on the cover page but it is absolutely legal to use. ** Not low quality India edition.** CD/DVD or access codes may not be included. N° de réf. du vendeur GB201900262

Description du livre Prentice Hall, 2011. Softcover. Etat : New. ***International Edition***Soft cover/Paperback*** Textbook printed in English. ***Brand New***. Most international edition has different ISBN and Cover design. Some book may show sales disclaimer such as "Not for Sale or Restricted in US" on the cover page but it is absolutely legal to use. All textbook arrives within 5-7business days. Please provides valid phone number with your order for easy delivery. N° de réf. du vendeur 9780132858038ch