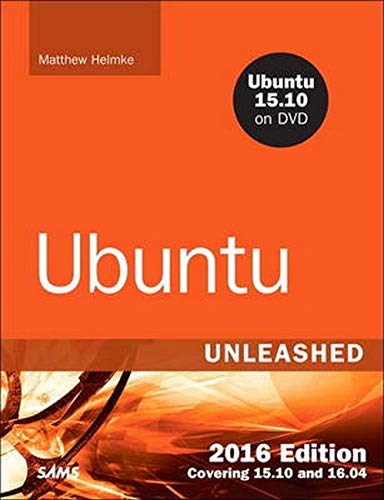 Ubuntu Unleashed 2016 Edition is filled with unique and advanced information for everyone who wants to make the most of the Linux-based Ubuntu operating system. This new edition has been thoroughly revised and updated by a long-time Ubuntu community leader to reflect the exciting new Ubuntu 15.10 while including tons of information that will continue to apply to future editions.

DVD includes the full Ubuntu 15.10 distribution for 64 bit computers (most desktop and notebooks systems today) as well as the complete LibreOffice office suite and hundreds of additional programs and utilities.

Purchase this book and receive a free Ubuntu 16.04 Kick Start chapter after Ubuntu 16.04 is released. See inside back cover for details. Biographie de l'auteur :

Matthew Helmke is an active member of the Ubuntu community. He served from 2006 to 2011 on the Ubuntu Forum Council, providing leadership and oversight of the Ubuntu Forums (www.ubuntuforums.org), and spent two years on the Ubuntu regional membership approval board for Europe, the Middle East, and Africa. He has written about Ubuntu for several magazines and websites, is a lead author of The Official Ubuntu Book, and coauthored The VMware Cookbook. He works as a senior technical writer for Pearson North America’s Assessment and Information division, documenting assessment software. Matthew first used Unix in 1987 while studying LISP on a Vax at the university. He has run a business using only free and open source software, has consulted, and has a master’s degree in Information Resources and Library Science from the University of Arizona. You can find out more about Matthew at matthewhelmke.com or drop him a line with errata or suggestions at matthew@matthewhelmke.com.

Andrew Hudson is a freelance journalist who specializes in writing about Linux. He has significant experience in Red Hat and Debian-based Linux distributions and deployments and can often be found sitting at his keyboard tweaking various settings and config files just for the hell of it. He lives in Wiltshire, which is a county of England, along with his wife, Bernice, and their son, John. Andrew does not like Emacs. He can be reached at andy.hudson@gmail.com.

Paul Hudson is a recognized expert in open-source technologies. He is also a professional developer and full-time journalist for Future Publishing. His articles have appeared in MacFormat, PC Answers, PC Format, PC Plus, and Linux Format. Paul is passionate about free software in all its forms and uses a mix of Linux and BSD to power his desktops and servers. Paul likes Emacs. Paul can be contacted through http://hudzilla.org.