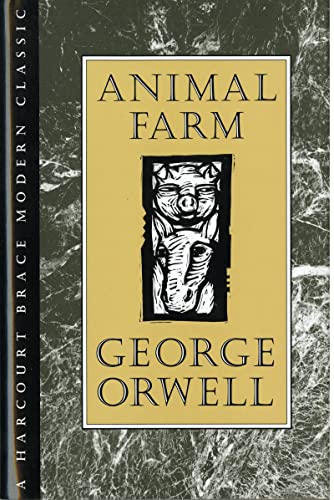 George Orwell (pseudonym for Eric Blair [1903-50]) was born in Bengal and educated at Eton; after service with the Indian Imperial Police in Burma, he returned to Europe to earn his living penning novels and essays. He was essentially a political writer who focused his attention on his own times, a man of intense feelings and intense hates. An opponent of totalitarianism, he served in the Loyalist forces in the Spanish Civil War. Besides his classic Animal Farm, his works include a novel based on his experiences as a colonial policeman, Burmese Days, two firsthand studies of poverty, Down and Out in Paris and London and The Road to Wigan Pier, an account of his experiences in the Spanish Civil War, Homage to Catalonia; and the extraordinary novel of political prophecy whose title became part of our language, 1984.

Description du livre Hardback. Etat : New. Language: English. Brand new Book. George Orwell's famous satire of the Soviet Union, in which "all animals are equal but some animals are more equal than others." AUTHOR: George Orwell (1903-1950) was born in India and served with the Imperial Police in Burma before joining the Republican Army in the Spanish Civil War. Orwell was the author of six novels as well as numerous essays and nonfiction works. N° de réf. du vendeur AA99780151072552

Description du livre Hardcover. Etat : new. Hardcover. George Orwell&#039;s famous satire of the Soviet Union, in which &quot;all animals are equal but some animals are more equal than others.&quot; Shipping may be from multiple locations in the US or from the UK, depending on stock availability. N° de réf. du vendeur 9780151072552