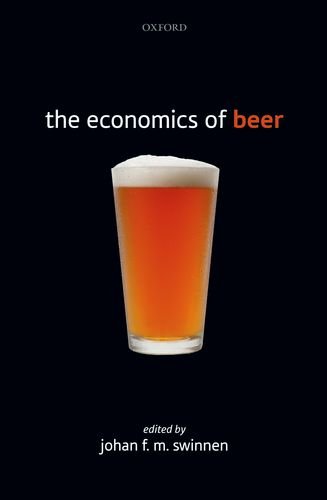 Beer has been consumed across the globe for centuries and was the drink of choice in many ancient societies. Today it is the most important alcoholic drink worldwide, in terms of volume and value. The largest brewing companies have developed into global multinationals, and the beer market has enjoyed strong growth in emerging economies, but there has been a substantial decline of beer consumption in traditional markets and a shift to new products. There is close interaction between governments and markets in the beer industry. For centuries, taxes on beer or its raw materials have been a major source of tax revenue and governments have regulated the beer industry for reasons related to quality, health, and competition. This book is the first economic analysis of the beer market and brewing industry. The introduction provides an economic history of beer, from monasteries in the early Middle Ages to the recent 'microbrewery movement', whilst other chapters consider whether people drink more beer during recessions, the effect of television on local breweries, and what makes a country a 'beer drinking' nation. It comprises a comprehensive and unique set of economic research and analysis on the economics of beer and brewing and covers economic history and development, supply and demand, trade and investment, geography and scale economies, technology and innovation, health and nutrition, quantity and quality, industrial organization and competition, taxation and regulation, and regional beer market developments.

...this volume is an important step forward for the popularization and professionalization of beer and brewing research. (Martin Stack, EH.net)

Informative and thought provoking ... One of the many excellent things about The Economics of Beer is that its authors take a sceptical economic approach, looking beyond [such] easy assumptions ... counterintuitive sensibility combined with hard-heeled econometric analysis. (Bee Wilson, Times Literary Supplement)

The scholars tackle some interesting questions, such as whether people drink more beer during a recession (they don't) and whether American television advertising contributed to the demise of local breweries in the 20th century (it did). (Andrew Frisicano, Time Out)

Johan Swinnen is Senior Research Fellow at the Centre for European Policy Studies (CEPS), Brussels, where he directs the programme on EU agricultural and food policy. He was previously Lead Economist at the World Bank and Economic Advisor at the European Commission. He consults for the OECD, FAO, EBRD, UNDP, IFAD, and several Governments and was coordinator of international research networks on food policy, institutional reforms, and economic development. He is President-Elect of the International Association of Agricultural Economists and a Fellow of the European Association of Agricultural Economists. He holds a PhD from Cornell University. He has published widely on political economy, institutional reform, trade, and agricultural and food policy.