Death of a Nag 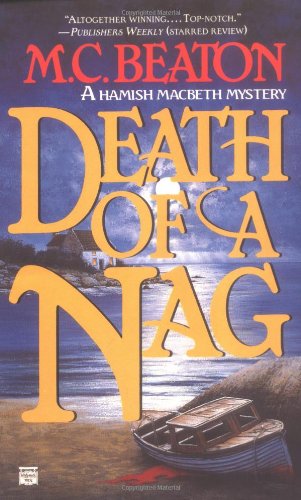 After a romantic disappointment and an undeserved demotion, Scots village bobby Hamish Macbeth decides a week's holiday at the coastal village of Skag might be just the ticket. He's dead wrong, of course: the food is dire, and the man in the next room nags his wife so loudly and continuously that more than one person at the Friendly House bed-and-breakfast wishes him dead, though only Hamish is heard threatening him. When this chap's body is found floating in the river Skag, Hamish is the prime suspect. While clearing his name, the lanky Scot has to deal with the widow who's suddenly making eyes at a refined bachelor, two leather-skirted Glaswegian beauties intent on raising disco hell, and the rude revelation of one family man's secret life. Some holiday!Praise for M.C. Beaton:The detective novels of M. C. Beaton, a master of outrageous black comedy, have reached cult status. Anne Robinson, The Times

From the author of the Agatha Raisin television series...DEATH OF A NAG: A Hamish Macbeth MysteryLochdubh constable Hamish Macbeth is more dour than ever after losing both his promotion and his girl, the loyal Priscilla Halbourton-Smythe. A trip to a charming seaside inn with his dog Towser is meant to raise his sagging spirits. Instead, he arrives at "Friendly House" to find the ambiance chilling, the food inedible, and his fellow guests less than neighborly. There's an amorous spinster, two tarty girls, a retired military man, a secretive London family, and Bob Harris, who so nags his wife, Doris, that everyone wants to kill him. Then somebody does. Soon Macbeth is called upon to act -- to dig into the past and deep into the heart to deliver something more daunting than merely the culprit: Justice.

Death of a Nag (Hamish Macbeth Mysteries, No. 11)

Death of a Nag (Hamish Macbeth Mysteries, No. 11)