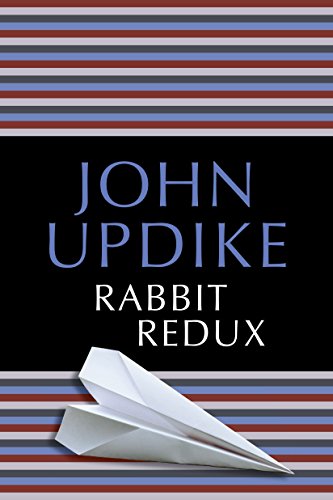 "A triumph."NEWSDAYThe assumptions and obsessions that control our daily lives are explored in tantalizing detail by master novelist John Updike in this wise, witty, and sexy story. Harry Angstrom--known to all as Rabbit, one of America's most famous literary characters--finds his dreary life shattered by the infidelity of his wife, Janice. How he resolves or further complicates his problems makes for a novel of the first order.

Men emerge pale from the little printing plant at four sharp, ghosts for an instant, blinking, until the outdoor light overcomes the look of constant indoor light clinging to them. In winter, Pine Street at this hour is dark, darkness presses down early from the mountain that hangs above the stagnant city of Brewer; but now in summer the granite curbs starred with mica and the row houses differentiated by speckled bastard sidings and the hopeful small porches with their jigsaw brackets and gray milk-bottle boxes and the sooty ginkgo trees and the baking curbside cars wince beneath a brilliance like a frozen explosion. The city, attempting to revive its dying downtown, has torn away blocks of buildings to create parking lots, so that a desolate openness, weedy and rubbled, spills through the once-packed streets, exposing church façades never seen from a distance and generating new perspectives of rear entryways and half-alleys and intensifying the cruel breadth of the light. The sky is cloudless yet colorless, hovering blanched humidity, in the way of these Pennsylvania summers, good for nothing but to make green things grow. Men don’t even tan; filmed by sweat, they turn yellow.

A man and his son, Earl Angstrom and Harry, are among the printers released from work. The father is near retirement, a thin man with no excess left to him, his face washed empty by grievances and caved in above the protruding slippage of bad false teeth. The son is five inches taller and fatter; his prime is soft, somehow pale and sour. The small nose and slightly lifted upper lip that once made the nickname Rabbit fit now seem, along with the thick waist and cautious stoop bred into him by a decade of the Linotyper’s trade, clues to weakness, a weakness verging on anonymity. Though his height, his bulk, and a remnant alertness in the way he moves his head continue to distinguish him on the street, years have passed since anyone has called him Rabbit.

“Harry, how about a quick one?” his father asks. At the corner where their side street meets Weiser there is a bus stop and a bar, the Phoenix, with a girl nude but for cowboy boots in neon outside and cactuses painted on the dim walls inside. Their buses when they take them go in opposite directions: the old man takes number 16A around the mountain to the town of Mt. Judge, where he has lived his life, and Harry takes number 12 in the opposite direction to Penn Villas, a new development west of the city, ranch houses and quarter-acre lawns contoured as the bulldozer left them and maple saplings tethered to the earth as if otherwise they might fly away. He moved there with Janice and Nelson three years ago. His father still feels the move out of Mt. Judge as a rejection, and so most afternoons they have a drink together to soften the day’s parting. Working together ten years, they have grown into the love they would have had in Harry’s childhood, had not his mother loomed so large between them.

“Make it a Schlitz,” Earl tells the bartender.

“Daiquiri,” Harry says. The air-conditioning is turned so far up he unrolls his shirt cuffs and buttons them for warmth. He always wears a white shirt to work and after, as a way of cancelling the ink. Ritually, he asks his father how his mother is.

But his father declines to make a ritual answer. Usually he says, “As good as can be hoped.” Today he sidles a conspiratorial inch closer at the bar and says, “Not as good as could be hoped, Harry.”

She has had Parkinson’s Disease for years now. Harry’s mind slides away from picturing her, the way she has become, the loosely fluttering knobbed hands, the shuffling sheepish walk, the eyes that study him with vacant amazement though the doctor says her mind is as good as ever in there, and the mouth that wanders open and forgets to close until saliva reminds it. “At nights, you mean?” The very question offers to hide her in darkness.

Again the old man blocks Rabbit’s desire to slide by. “No, the nights are better now. They have her on a new pill and she says she sleeps better now. It’s in her mind, more.”

“We don’t talk about it, Harry, it isn’t in her nature, it isn’t the type of thing she and I have ever talked about. Your mother and I have just let a certain type of thing go unsaid, it was the way we were brought up, maybe it would have been better if we hadn’t, I don’t know. I mean things now they’ve put into her mind.”

“Who’s this they?” Harry sighs into the Daiquiri foam and thinks, He’s going too, they’re both going. Neither makes enough sense. As his father pushes closer against him to explain, he becomes one of the hundreds of skinny whining codgers in and around this city, men who have sucked this same brick tit for sixty years and have dried up with it.

“Why, the ones who come to visit her now she spends half the day in bed. Mamie Kellog, for one. Julia Arndt’s another. I hate like the Jesus to bother you with it, Harry, but her talk is getting wild and with Mim on the West Coast you’re the only one to help me straighten out my own mind. I hate to bother you but her talk is getting so wild she even talks of telephoning Janice.”

“Janice! Why would she call Janice?”

“Well.” A pull on the Schlitz. A wiping of the wet upper lip with the bony back of the hand, fingers half-clenched in an old man’s clutching way. A loose-toothed grimacing getting set to dive in. “Well the talk is about Janice.”

“Now Harry, don’t blow your lid. Don’t blame the bearer of bad tidings. I’m trying to tell you what they say, not what I believe.”

“I’m just surprised there’s anything to say. I hardly see her any more, now that she’s over at Springer’s lot all the time.”

“Well, that’s it. That may be your mistake, Harry. You’ve taken Janice for granted ever since—the time.” The time he left her. The time the baby died. The time she took him back. “Ten years ago,” his father needlessly adds. Harry is beginning, here in this cold bar with cactuses in plastic pots on the shelves beneath the mirrors and the little Schlitz spinner doing its polychrome parabola over and over, to feel the world turn. A hopeful coldness inside him grows, grips his wrists inside his cuffs. The news isn’t all in, a new combination might break it open, this stale peace.

“Harry, the malice of people surpasses human understanding in my book, and the poor soul has no defenses against it, there she lies and has to listen. Ten years ago, wouldn’t she have laid them out? Wouldn’t her tongue have cut them down? They’ve told her that Janice is running around. With one certain man, Harry. Nobody claims she’s playing the field.”

The coldness spreads up Rabbit’s arms to his shoulders, and down the tree of veins toward his stomach. “Do they name the man?”

“Not to my knowledge, Harry. How could they now, when in all likelihood there is no man?”

The bar television is running, with the sound turned off. For the twentieth time that day the rocket blasts off, the numbers pouring backwards in tenths of seconds faster than the eye until zero is reached: then the white boiling beneath the tall kettle, the lifting so slow it seems certain to tip, the swift diminishment into a retreating speck, a jiggling star. The men dark along the bar murmur among themselves. They have not been lifted, they are left here. Harry’s father mutters at him, prying. “Has she seemed any different to you lately, Harry? Listen, I know in all probability it’s what they call a crock of shit, but—has she seemed any, you know, different lately?”

It offends Rabbit to hear his father swear; he lifts his head fastidiously, as if to watch the television, which has returned to a program where people are trying to guess what sort of prize is hidden behind a curtain and jump and squeal and kiss each other when it turns out to be an eight-foot frozen-food locker. He might be wrong but for a second he could swear this young housewife opens her mouth in mid-kiss and gives the m.c. a taste of her tongue. Anyway, she won’t stop kissing. The m.c.’s eyes roll out to the camera for mercy and they cut to a commercial. In silence images of spaghetti and some opera singer riffle past. “I don’t know,” Rabbit says. “She hits the bottle pretty well sometimes but then so do I.”

“Not you,” the old man tells him, “you’re no drinker, Harry. I’ve seen drinkers all my life, somebody like Boonie over in engraving, there’s a drinker, killing himself with it, and he knows it, he couldn’t stop if they told him he’d die tomorrow. You may have a whisky or two in the evening, you’re no spring chicken anymore, but you’re no drinker.” He hides his loose mouth in his beer and Harry taps the bar for another Daiquiri. The old man nuzzles closer. “Now Harry, forgive me for asking if you don’t want to talk about it, but how about in bed? That goes along pretty well, does it?”

“No,” he answers slowly, disdainful of this prying, “I wouldn’t exactly say well. Tell me about Mom. Has she had any of those breathing fits lately?”

“Not a one that I’ve been woken up for. She sleeps like a baby with those new green pills. This new medicine is a miracle, I must admit—ten more years the only way to kill us’ll be to gas us to death, Hitler had the right idea. Already, you know, there aren’t any more crazy people: just give ’em a pill morning and evening and they’re sensible as Einstein. You wouldn’t exactly say it does, go along O.K., is that what I understood you said?”

In this sequel to Rabbit, Run, John Updike resumes the spiritual quest of his anxious Everyman, Harry “Rabbit” Angstrom. Ten years have passed; the impulsive former athlete has become a paunchy thirty-six-year-old conservative, and Eisenhower’s becalmed America has become 1969’s lurid turmoil of technology, fantasy, drugs, and violence. Rabbit is abandoned by his family, his home invaded by a runaway and a radical, his past reduced to a ruined inner landscape; still he clings to semblances of decency and responsibility, and yearns to belong and to believe.