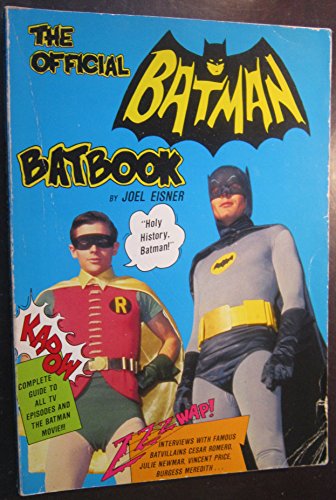 Joel Eisner is the author of three successful tv pop culture books including the bestselling Official Batman Batbook (it sold over 100, 000 copies when it was first released in 1986). He also co-wrote Lost in Space Forever (0n the LIS tv series) and Television Comedy Series: An episode Guide to 153 TV Sitcoms in Syndication. The Revised Bat-Edition is a newly updated and enlarged version of the original Batbook which surpasses the original in both scope and content. His next project is an authorized biography of actor Vincent Price. The book authorized by Mr Price prior to his death, is the first book to contain hundreds of stories and memories in Price's own words. A limited edition color Batbook is planned for the future.

The Official Batman Batbook Revised Bat-Edition is the only official guide to the 1966 television series. (The original edition sold over 100,000 copies worldwide) Containing a detailed guide to every episode and the feature film. Obsecure batfacts, trivia, a complete list of Holy Words, Batfight words, BatEquipment. Interviews with cast and crew members. This newly updated edition contains hundreds of new photos, additional facts (like cast salaries), trivia and interviews with guest stars, henchmen, crew members and the producers.