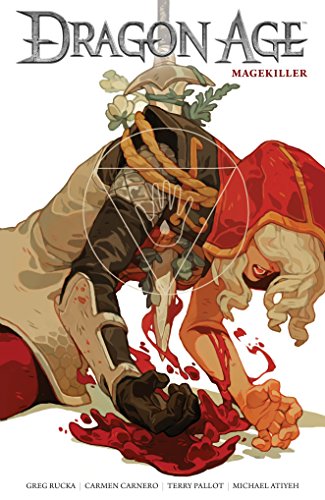 (W) Greg Rucka (A) Carmen Nunez Carnero, Terry Pallot (CA) Sachin Teng Tessa and Marius are mercenary partners who eliminate those that use magic to hurt others. When they betray a powerful patron intending to kill them, they're forced to flee and join the Inquisition. Collects issues #1-#5 of the miniseries.

Greg Rucka was born in San Francisco and raised on the Central Coast of California. He began his writing career in earnest at the age of 10 by winning a county-wide short-story contest, and hasn't let up since. He graduated from Vassar College with an A.B. in English, and from the University of Southern California's Master of Professional Writing program with an M.F.A.

He is the author of nearly a dozen novels, six featuring bodyguard Atticus Kodiak, and two featuring Tara Chace, the protagonist of his Queen & Country series. Additionally, he has penned several short-stories, countless comics, and the occasional non-fiction essay. In comics, he has had the opportunity to write stories featuring some of the world's best-known characters--Superman, Batman, and Wonder Woman--as well as penning several creator-owned properties himself, such as Whiteout and Queen & Country, both published by Oni Press. His work has been optioned for film several times over, and his services are in high-demand in a variety of creative fields as a story-doctor and creative consultant.

"Hardcore Dragon Age fans will appreciate the deeper dive into cultures and lore, while newcomers ... can appreciate the brutal battles, clever writing, gorgeous and detailed art, and lovable, thoughtful cast of characters." -IGN

"I think the effort that Bioware has consistently put into every on of their roleplaying games-- we can talk aboutMass Effect, we can talk about Dragon Age, we can talk about Jade Empire, you can go down the list--is really stunning. I know with Dragon Age in particular, we're talking about a fantasy setting that is probably one of the most fully and beautifully realized examples of world building that we've seen." --Greg Rucka, author