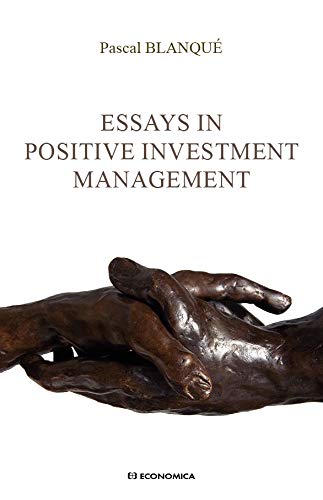 There are few people with better insight into investment management than Pascal Blanqué. In this important and timely book, Blanqué makes a powerful claim for positive investment in order to avoid fanciful illusions. He assigns it the task of understanding what is happening in today s world. Blanqué argues that the investment world contains many elements of a fairytale and shows that a mere confrontation with reality leaves its mark on the impressive procession of theoretical, sacred cows, of established beliefs and truths. As does the confrontation with crises. The essays included in this volume accordingly include an objective assessment of the discipline s sacred cows, the effective dynamic of the financial markets concerning value, liquidity and momentum, the possibility of anticipating the return on financial assets and the reality of long-term investment. Blanqué demonstrates the importance of a better understanding of the psychological referential of the Subject and of those individuals who interact within this universe of anticipation and imagination, and also that of institutions and their governance. Blanqué describes the role of time, duration, memory and forgetfulness. Ultimately, these essays explore a number of ways to renew the traditional approaches (allocation, indices, inefficiencies which can be exploited...). There has never been such a need for sound management to bridge the gap between abundant savings and unsatisfied investment requirements. We need new ways to rechannel investment management for the good. We need more investment science not less.

Pascal Blanqué is deputy CEO, Chief Investment Officer and Head of the Institutional Business for a major international Asset Management company. He formerly served as Chief Economist and Head of Research of a large international banking group. His work focuses on monetary issues, the functioning of financial markets and the philosophical foundations of economics. His books include Money, Memory and Asset Prices, The Social Economy of Freedom and Philosophy in Economics. He was awarded European CIO of the Year 2013 by Funds Magazine. Born in 1964, Pascal Blanqué graduated from France s Ecole Normale Supérieure and Paris Institut d Etudes Politiques, before earning a Ph.D in Finance from the University of Paris Dauphine.