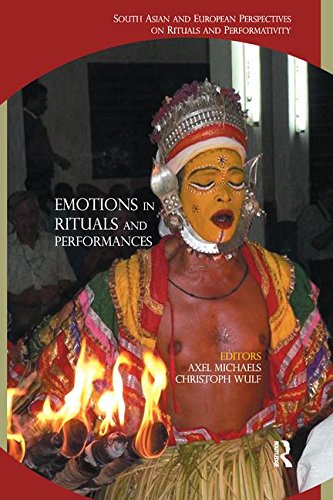 9781138664821 This listing is a new book, a title currently in-print which we order directly and immediately from the publisher. For all enquiries, please contact Herb Tandree Philosophy Books directly - customer service is our primary goal. N° de réf. du libraire HTANDREE01015612

Challenging the idea that rituals are static and emotions irrational, the volume explores the manifold qualities of emotions in ritual practices. Focusing explicitly on the relationship between emotions and rituals, it poses two central questions. First, how and to what extent do emotions shape rituals? Second, in what way are emotions ritualized in and beyond rituals? Strong emotions are generally considered to be more spontaneous and uncontrolled, whereas ritual behaviour is regarded as planned, formalized and stereotyped, and hence less emotional. However, as the volume demonstrates, rituals often reveal strong emotions among participants, are motivated by feelings, or are intended to generate them.

The essays discuss the motivation for rituals; the healing function of emotions; the creation of new emotions through new media; the aspect of mimesis in the generation of feelings; individual, collective, and non-human emotions; the importance of trance and possession; staged emotions and emotions on stage; emotions in the context of martyrdom; emotions in Indian and Western dance traditions; emotions of love, sorrow, fear, aggression, and devotion. Furthermore, aesthetic and sensory dimensions, as well as emic concepts, of emotions in rituals are underscored as relevant in understanding social practice.

All items have been carefully inspected but any found to be unsatisfactory, for whatever reasons, may be returned, please contact us on how to return a book. Our books are listed in pounds sterling, and besides accepting payment via credit card and personal UK cheque - alternative ways: (1) we are happy to invoice you in Euros, and you can either pay us via int'l bank transfer (IBAN/BIC codes will be on the invoice), or a euro cheque drawn on your personal account; (2) we can also bill in US dollars, and payment can be made with a USD personal cheque (there is a bank conversion fee added on for this means). All orders will be acknowledged, prices are net, p/p + insturance extra. Shipping prices quoted on ABE are for various air economy rates. These are for unsecured services, quotes for secured (tracked) services can be quoted for upon request, these can be quite reasonable on hearvier book parcels.

Books sent on approval, packing and post extra, alternative payment means and billing in different currencies are noted above.