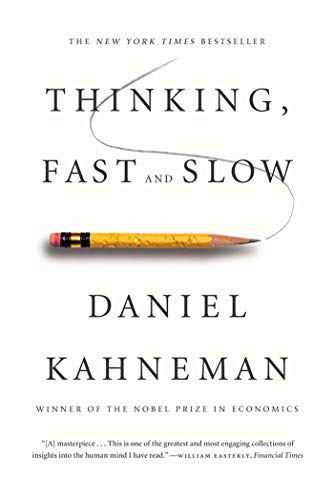 There have been many good books on human rationality and irrationality, but only one masterpiece. That masterpiece is Daniel Kahneman's Thinking, Fast and Slow.Kahneman, a winner of the Nobel Prize for economics, distils a lifetime of research into an encyclopedic coverage of both the surprising miracles and the equally surprising mistakes of our conscious and unconscious thinking. He achieves an even greater miracle by weaving his insights into an engaging narrative that is compulsively readable from beginning to end. My main problem in doing this review was preventing family members and friends from stealing my copy of the book to read it for themselves...this is one of the greatest and most engaging collections of insights into the human mind I have read (William Easterly Financial Times )

Absorbing, intriguing...By making us aware of our minds' tricks, Kahneman hopes to inspire individuals and organisations to identify strategies to outwit them (Jenni Russell Sunday Times )

Profound . . . As Copernicus removed the Earth from the centre of the universe and Darwin knocked humans off their biological perch, Mr. Kahneman has shown that we are not the paragons of reason we assume ourselves to be (The Economist )

[Thinking, Fast and Slow] is wonderful, of course. To anyone with the slightest interest in the workings of his own mind, it is so rich and fascinating that any summary would seem absurd (Michael Lewis Vanity Fair )

It is an astonishingly rich book: lucid, profound, full of intellectual surprises and self-help value. It is consistently entertaining and frequently touching, especially when Kahneman is recounting his collaboration with Tversky . . . So impressive is its vision of flawed human reason that the New York Times columnist David Brooks recently declared that Kahneman and Tversky's work 'will be remembered hundreds of years from now,' and that it is 'a crucial pivot point in the way we see ourselves.' They are, Brooks said, 'like the Lewis and Clark of the mind' . . . By the time I got to the end of Thinking, Fast and Slow, my skeptical frown had long since given way to a grin of intellectual satisfaction. Appraising the book by the peak-end rule, I overconfidently urge everyone to buy and read it. But for those who are merely interested in Kahenman's takeaway on the Malcolm Gladwell question it is this: If you've had 10,000 hours of training in a predictable, rapid-feedback environment-chess, firefighting, anesthesiology-then blink. In all other cases, think (The New York Times Book Review )

[Kahneman's] disarmingly simple experiments have profoundly changed the way that we think about thinking . . . We like to see ourselves as a Promethean species, uniquely endowed with the gift of reason. But Mr. Kahneman's simple experiments reveal a very different mind, stuffed full of habits that, in most situations, lead us astray (Jonah Lehrer The Wall Street Journal )

This is a landmark book in social thought, in the same league as The Wealth of Nations by Adam Smith and The Interpretation of Dreams by Sigmund Freud (Nassim Nicholas Taleb, Author Of 'the Black Swan' )

Daniel Kahneman is among the most influential psychologists in history and certainly the most important psychologist alive today...The appearance of Thinking, Fast and Slow is a major event (Steven Pinker, Author Of The Language Instinct )

Daniel Kahneman is one of the most original and interesting thinkers of our time. There may be no other person on the planet who better understands how and why we make the choices we make. In this absolutely amazing book, he shares a lifetime's worth of wisdom presented in a manner that is simple and engaging, but nonetheless stunningly profound. This book is a must read for anyone with a curious mind (Steven D. Levitt, Co-Author Of 'freakonomics' )

This book is a tour de force by an intellectual giant; it is readable, wise, and deep. Buy it fast. Read it slowly and repeatedly. It will change the way you think, on the job, about the world, and in your own life (Richard Thaler, Co-Author Of 'nudge' )

[A] tour de force of psychological insight, research explication and compelling narrative that brings together in one volume the high points of Mr. Kahneman's notable contributions, over five decades, to the study of human judgment, decision-making and choice . . . Thanks to the elegance and force of his ideas, and the robustness of the evidence he offers for them, he has helped us to a new understanding of our divided minds-and our whole selves (Christoper F. Chabris The Wall Street Journal )

Thinking, Fast and Slow is a masterpiece - a brilliant and engaging intellectual saga by one of the greatest psychologists and deepest thinkers of our time. Kahneman should be parking a Pulitzer next to his Nobel Prize (Daniel Gilbert, Professor Of Psychology, Harvard University, Author Of 'stumbling On Happiness', Host Of The Award-Winning Pbs Television Series 'this Emotional Life' )

A major intellectual event . . . The work of Kahneman and Tversky was a crucial pivot point in the way we see ourselves (David Brooks The New York Times )

This book is one of the few that must be counted as mandatory reading for anyone interested in the Internet, even though it doesn't claim to be about that. Before computer networking got cheap and ubiquitous, the sheer inefficiency of communication dampened the effects of the quirks of human psychology on macro scale events. No more. We must now confront how we really are in order to make sense of our world and not screw it up. Daniel Kahneman has discovered a path to make it possible (Jaron Lanier, Author Of You Are Not A Gadget )

For anyone interested in economics, cognitive science, psychology, and, in short, human behavior, this is the book of the year. Before Malcolm Gladwell and Freakonomics, there was Daniel Kahneman who invented the field of behavior economics, won a Nobel...and now explains how we think and make choices. Here's an easy choice: read this (The Daily Beast )

I will never think about thinking quite the same. [Thinking, Fast and Slow] is a monumental achievement (Roger Lowenstein Bloomberg/Businessweek )

A terrific unpicking of human rationality and irrationality - could hardly have been published at a better moment. Kahnemann is the godfather of behavioural economics, and this distillation of a lifetime's thinking about why we make bad decisions - about everything from money to love - is full of brilliant anecdote and wisdom. It is Kahnemann's belief that anyone who thinks they know exactly what is going on hasn't understood the question; as such it's the perfect gift for opinionated family members everywhere. (Tim Adams Observer Books of the Year )

The book I most want to be given is Thinking, Fast and Slow by Daniel Kahneman. I'm a speedy thinker myself, so am hoping to be endorsed in that practice. (Sally Vickers Observer Books of the Year )

In this comprehensive presentation of a life's work, the world's most influential psychologist demonstrates that irrationality is in our bones, and we are not necessarily the worse for it (10 Best Books Of 2011 New York Times )

Daniel Kahneman, recipient of the Nobel Prize in Economic Sciences for his seminal work in psychology challenging the rational model of judgment and decision making, is one of the world's most important thinkers. His ideas have had a profound impact on many fields-including business, medicine, and politics-but until now, he has never brought together his many years of research in one book. In Thinking, Fast and Slow, Kahneman takes us on a groundbreaking tour of the mind and explains the two systems that drive the way we think and make choices. One system is fast, intuitive, and emotional; the other is slower, more deliberative, and more logical. Kahneman exposes the extraordinary capabilities-and also the faults and biases-of fast thinking, and reveals the pervasive influence of intuitive impressions on our thoughts and behaviour. The importance of properly framing risks, the effects of cognitive biases on how we view others, the dangers of prediction, the right ways to develop skills, the pros and cons of fear and optimism, the difference between our experience and memory of events, the real components of happiness-each of these can be understood only by knowing how the two systems work together to shape our judgments and decisions. Drawing on a lifetime's experimental experience, Kahneman reveals where we can and cannot trust our intuitions and how we can tap into the benefits of slow thinking. He offers practical and enlightening insights into how choices are made in both our professional and our personal lives-and how we can use different techniques to guard against the mental glitches that often get us into trouble. Thinking, Fast and Slow will transform the way you take decisions and experience the world.

Description du livre Paperback. Etat : New. Paperback. Selected by the "New York Times Book Review" as one of the best books of 2011A "Globe and Mail" Best Books of the Year 2011 TitleOne of "The Economist"'s.Shipping may be from multiple locations in the US or from the UK, depending on stock availability. 499 pages. 0.512. NḞ de réf. du vendeur 9780374533557

Description du livre Farrar, Straus & Giroux Inc, United States, 2013. Paperback. Etat : New. Reprint. Language: English. Brand new Book. Major New York Times bestsellerOver two million copies soldSelected by the New York Times Book Review as one of the ten best books of 2011Selected by The Wall Street Journal as one of the best nonfiction books of 20112013 Presidential Medal of Freedom RecipientDaniel Kahneman's work with Amos Tversky is the subject of Michael Lewis's best-selling The Undoing Project: A Friendship That Changed Our Minds In his mega bestseller, Thinking, Fast and Slow, Daniel Kahneman, world-famous psychologist and winner of the Nobel Prize in Economics, takes us on a groundbreaking tour of the mind and explains the two systems that drive the way we think. System 1 is fast, intuitive, and emotional; System 2 is slower, more deliberative, and more logical. The impact of overconfidence on corporate strategies, the difficulties of predicting what will make us happy in the future, the profound effect of cognitive biases on everything from playing the stock market to planning our next vacation--each of these can be understood only by knowing how the two systems shape our judgments and decisions. Engaging the reader in a lively conversation about how we think, Kahneman reveals where we can and cannot trust our intuitions and how we can tap into the benefits of slow thinking. He offers practical and enlightening insights into how choices are made in both our business and our personal lives--and how we can use different techniques to guard against the mental glitches that often get us into trouble. Topping bestseller lists for almost ten years, Thinking, Fast and Slow is a contemporary classic, an essential book that has changed the lives of millions of readers. NḞ de réf. du vendeur BTE9780374533557